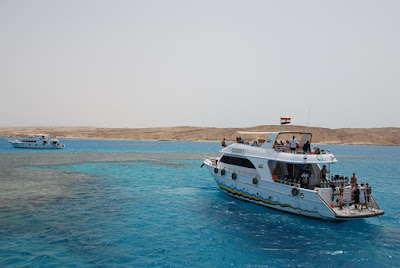 Sharm El Shaikh is a city in Sinai, Egypt located on the red sea known best for corals and sea life.
I honestly thought it's just like flat, hot and dusty just like Kuwait but I didn't really expect what I saw...I was there from 29th of April 2009 until 9th of May 2009, everybody I knew told me that's a long period to spend over there but after spending all those 10 days yet I think it's not enough for a first time.
Going back on time, I packed my bag with plenty of tanktops, swimwear, shorts, snorkel, a diving mask and a water proof case for my digital SLR camera which I ordered online.
Until then I had no clue that I'll comeback to Kuwait with a new hobby which is Snorkeling.
I've done plenty of fun things over there, I went to many different locations and of course I've taken tons of photos...The only sucky thing about was me being the photographer so I don't get many photos of me :(
Cleopark (which is a water park) was fun although there is a larger water park called Aqua park but I didn't know it until one day before going back to Kuwait.
I went to many cruises where I had the chance to snorkeling in the open sea and enjoy the corals and colored fish , one was to Ras Mohammed, one to the blue hole (which was my favorite spot) we took a 4*4 car then a camel (that was a scary ride) and thrid one was to Tiran island where I almost drowned because I was exuasted from last day's trip so I spent the rest of the trip sleeping *blushes* LOL
The only things I regret:
- Sleeping when we got closer to the recked ship on Tiran island cruise
- Not going to Aqua Park (the large one)
By radiantguy.com 5 comments: