Latifa won the best middle eastern singer in the World Music Awards 2004 for that album. It's was a smash hit in the Arab world.
This song is a great example of Arab Pop Music, you can listen to Arab instruments such as Tabla along with Techno beats, she perform a short part with Arab rhythms in the song.

The song was performed in three different languages!
The first time in the year 2001 by the Greek singer "Despina Vandi", the song's name is "Ah Kardoula Mou".
In the year 2003 the song's music was recomposed and rearranged (legally) and released in Arabic language by "Latifa", the song's name is "Ma Etrohsh Ba'ed" (Don't go away).
"Havas" is the name of the Persian version, released in 2005...It's a remix of the Arabic version performed by the Persian singer "Shohreh Solati"; that one wasn't legal.

Despite it's legal or not, I think it's a great way that people around the world can share the exact passion of Music, I know it's took two years for each version to reach others and I really wish if there is a faster way so everybody can listen to the latest songs in all over the world in the exact released date. 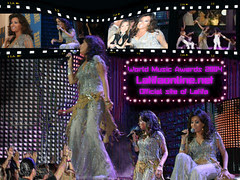 The photo above is my graphics work of Latifa performing the song in the World Music Awards 2004 also you might notice her photo with Celine Dion.
Latifa's speech was censored by the USA media when she said "My happiness remains incomplete until Iraq & Palestine are freed"!

DOWNLOAD the MP3 at 192 KBPS (4shared host)
Song's name: Me Etrohsh Ba'ed (Don't go away)
Singer: Latifa (Check her official site or read about her at wikipedia)
Writer: Mohammed Refa'ei
Composer: Phoebus and Mohammed Refa'ei
Arranged by: Jean-Marie Reyachi
Translated by: Hanine Jaraiseh and Me


My Love, Don't go away
My love, I need you beside me
My love, come closer to me...Come closer

For many starry nights I’ve been living imagining you in my fantasies...
Before seeing you my precious I kept thinking of you every awaking moment


My love, while you are beside me all my life is full of love; your love is the most valuable to me.
With every night your words were on my mind, you are the life in my eyes and the world to my heart.

Hi, I enjoyed seeing the english translation of Latifa Ma etrohsh ba'ed, where can i find the lyrics in arabic script. Cheers.

Thanks for your comment.
I just added the lyrics in Arabic script, Enjoy ;)